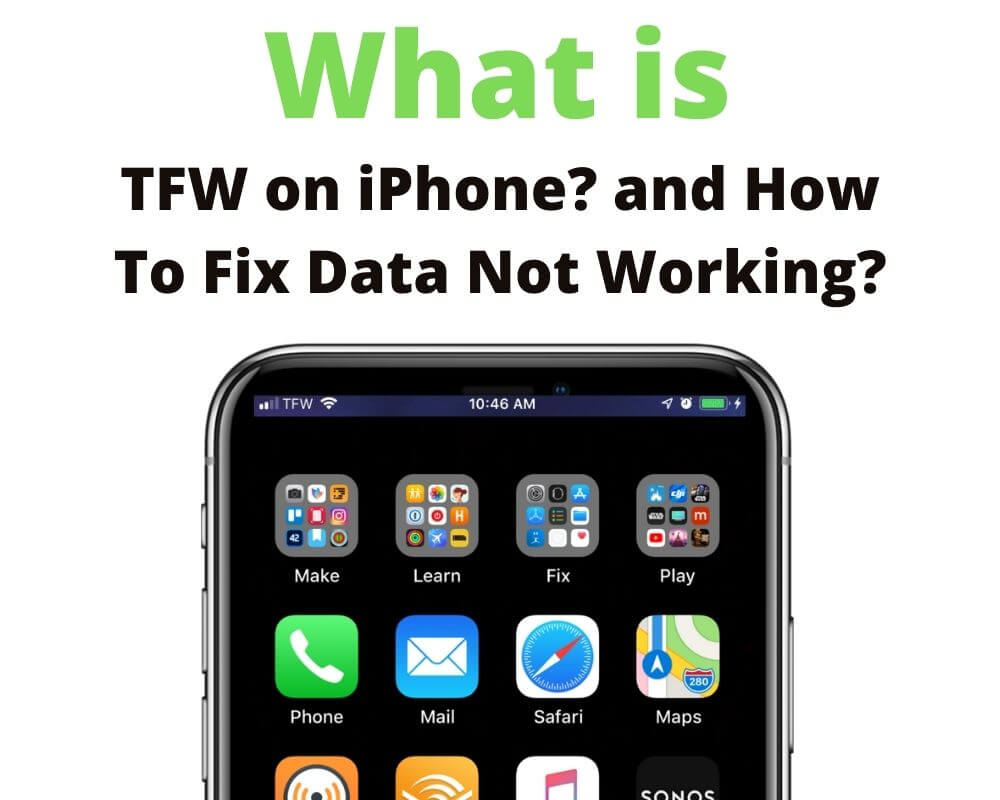 Many iPhone users have seen a ‘tfw data not working’ notification on their devices and have been left wondering what is the meaning of the tfw phone carrier. Are you an iPhone user who has encountered the same issue, even feeling like you are out of options? Worry less; the tfw network is a simple acronym that means a lot for your iPhone operation. However, you might never understand what TracFone wireless is unless you take the time to read this well-researched and elaborate write-up.

In this blog, we will discuss in detail what tfw stands for on an iPhone, whether it is GSM or CDMA, whether its phones are unlocked, how to activate its SIM cards, and how to troubleshoot its mobile data networking problems. Take your time to read it, and rest assured to be well-equipped to handle TracFone Wireless-related issues.

What does tfw mean on my iPhone?

First things first, we need to understand what tfw means on your iPhone before getting into the nitty-gritty about solving its data issues and the like. Simply put, it means your wireless carrier company name.

The US has more than a hundred wireless carriers, but only five are recognized to operate independently at a national level. The rest uses the services provided by the big five.

You might wonder how TracFone Wireless gets into the mix. As mentioned in the above paragraph, TFW is a wireless phone carrier company name.

The tfw means that it is not a carrier itself but provides services offered by wireless carriers. Actually, tfw is an acronym for TracFone Wireless, a company that provides the services of a wireless network carrier.

What company is TFW carrier with?

TracFone Wireless (tfw) has brands, and it does not operate in isolation or with its own wireless carriers. There are many brands that operate under the tfw umbrella, but we will only mention a few that represent the rest.

For instance, have you ever heard of TracFone, Net10, Straight Talk, Total Wireless, or Simple Mobile? All these are brands under the TracFone wireless umbrella. Without the tfw network, they would not be in the picture at all.

Still, among the mentioned brands, Straight Talk, TracFone, and Net10 take the cake and are more popular than the rest.

Networks bundle settings! What about it?

As shown in the preceding paragraph, tfw is just a carrier company for a wireless network or its provider. Of course, many other companies provide the services of wireless network carriers, and TracFone Wireless is one of them.

It’s notable that despite having many brands in the mix, tfw chose to have one network bundle setting for all of them. As such, Net10, Straight Talk, and TracFone now operate using the same bundle specifications.

Is TFW a good network carrier for iPhone?

One question we have had to answer often is how important tfw is good to your iPhone and whether your device really needs it.

Well, the simple answer to this is that if your iPhone has tfw as its wireless network carrier, it is definitely TracFone Wireless services.

This is because voice-mailing, messaging, internet calls, cellular data connections, and personal hotspots are just but a few of the provisions that are actualized courtesy of wireless carrier companies such as tfw.

Without TracFone Wireless (tfw), your iPhone would not send calls, messages, or receive them, leave alone create hotspots using it.

Why is TracFone Wireless service popular for iPhone users?

Have you ever wondered what’s behind such a haze?

The main reason behind this is that TracFone Wireless interestingly ticks the box for the bare minimum. As such, it has all that you basically need to run your iPhone, send messages, outgoing calls, create hotspots, etc.

Besides, it is among the cheapest mobile service providers that do not compromise quality. Really, who does not appreciate such companies, especially now that the Covid-19 pandemic is making things even tighter?

Lastly, tfw is the way to go if you want a wireless network carrier that does not require contracts. It’s easy; no major commitments or lame formalities. It’s no wonder that many people flock to it.

Does this mean that TracFone Wireless does not have its own flaws or is it not a reliable service?

Let’s see about that in the next section.

Is TFW carrier a reliable service?

As mentioned previously, tfw is indeed many people’s choice when it comes to wireless network carriers because it is cheap, requires no contracts, and provides quality services.

Nonetheless, like other mobile service providers, the tfw network is not 100% reliable. In fact, issues related to network problems are more commonplace today than ever. It may be this reliable someday, but we are quite far from this reality as far as we know it.

The major reason behind this is that our beloved company does not have its own set of towers. This is the case since it is an MVNO (mobile virtual network operator), and not an independent carrier.

What the heck is MVNO? The next section addresses this and how it relates to tfw not being reliable.

What is an MVNO?

A mobile virtual network operator or MVNO refers to a smaller wireless carrier that works and broadcasts the services of a major wireless network provider. As mentioned at the outset, the US has over 100 wireless carriers, but only five have their own towers and operate at a national level.

The big five companies are AT&T, Sprint, Verizon, T-Mobile, and US Cellular. Still, the first four are the most popular.

How, then, does tfw get into the mix?

As an MVNO, it does not have its own towers but borrows the hardware of Verizon, T-Mobile, Sprint, and AT&T to broadcast mobile network signals.

This means that tfw can only be as good as these companies whose signals it broadcasts, explaining the network issues attached to it. However, on the flip side, TracFone wireless tends to have the most stable services because it borrows hardware and signals from multiple companies.

Is tfw carrier GSM or CDMA?

The other question iPhone users often ask is whether the tfw carrier is GSM (Global System Mobile) or CDMA (Code Division Multiple Access). The two acronyms stand for network technologies primarily used during the 2G and 3G eras but are becoming obsolete as more standardized technologies, including 4G- LTE and 5G, are taking shape.

Furthermore, most wireless carriers that borrow Verizon and Sprint signals use CDMA technology, while those that use AT&T and T-Mobile hardware are GSM-enables. Interestingly, TracFone wireless phones use either of two networks, depending on your location and the carrier whose signals are being broadcast.

Many clients have wanted to know whether the tfw phone carrier is unlocked. When a device is unlocked and a SIM card inserted, it means that you can switch SIM cards and use the mobile services of another country if the latter allows such services for unlocked iPhones.

Initially, tfw was known for locking its phones, meaning that one would never enjoy the mobile services of another country once he is out of his country. However, most tfw phones carrier, especially smart devices, are now unlocked following the ruling against TracFone.

How to activate the tfw SIM card on your phone?

When you buy a new tfw phone, it comes with a SIM card. Consequently, there is no need to buy a new SIM or airtime card. Besides, if you have free calls and minutes on your old SIM card, you can transfer them to the new one.

The activation process is as simple as selecting Activate SIM card on the device’s Settings menu and accepting the company’s terms and conditions.

Why is tfw data not working and what causes it?

As stated previously, TracFone wireless has its limitations, and network issues are not uncommon with this mobile service provider. Consequently, you might see a ‘tfw not working’ or iPhone is not activated contact your carrier pop-up when using your iPhone.

Have you wondered what this error means and what causes it?

Simply put, tfw data not working on your iPhone refers to bugs and errors. A TracFone wireless device may experience when it cannot get data signals or gets no signals at all.

More often than not, it is related to TracFone wireless not having its own tower. Besides, it can also originate from system problems. The good news is that you can fix the tfw data not working error.

How to fix the ‘tfw data not working’ error?

TFW data not working on your phone error can be annoying, especially if you have no clue on how to sort it. Nonetheless, rest assured that you can sort out this problem. Here are a few techniques that would help;

TFW is the short form for TracFone Wireless and denotes a wireless carrier company or a mobile virtual network operator (MVNO). It does not have its own hardware but borrows signals from other carriers, including AT&T, T-Mobile, and Verizon. Because of system or network coverage issues, tfw may stop working on the phone, resulting in the ‘tfw data not working’ pop-up. This article explains everything about TracFone wireless, including how to troubleshoot the error.