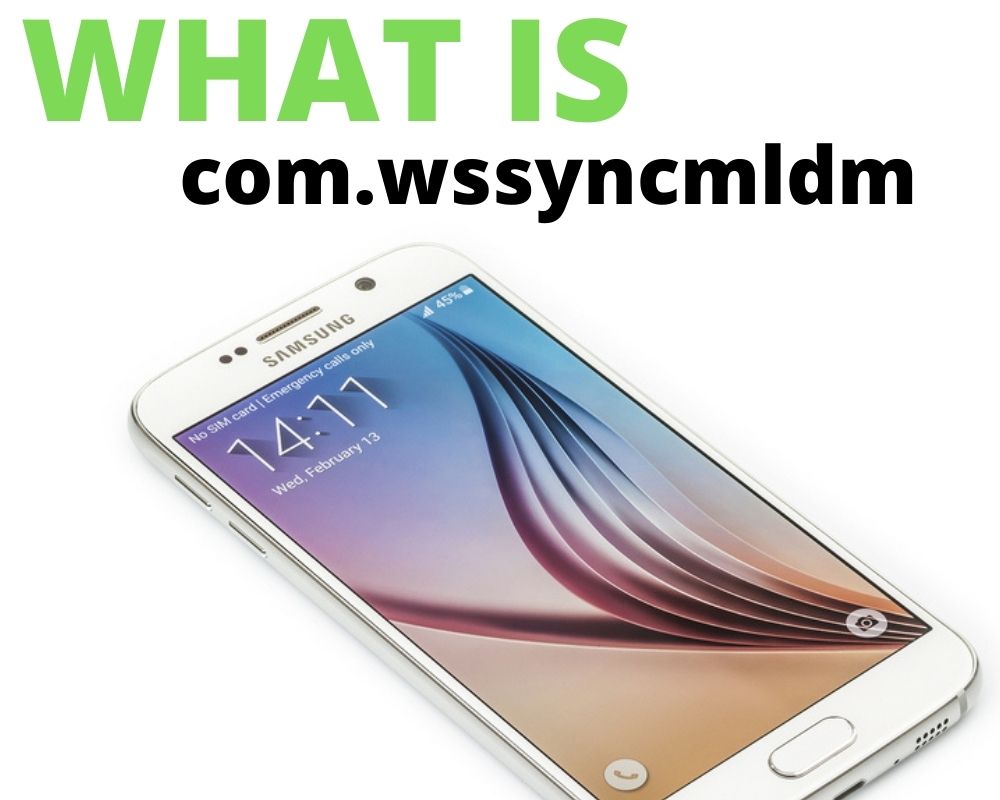 Most Samsung phones come with multiple pre-installed applications that usually run in the background. These Android apps include com.wssyncmldm iothiddenmenu.

Though this application is meant to run in the background without inconveniencing the user, it may appear in the Google activity or pop up on the screen, yet you have not opened it. However, the good news is that you can still fix the issue manually without contacting the service center.

This article, therefore, gives detailed information about com.wssyncmldm, including what it is? if it is spyware, and how to fix its errors.

What Is Com.wssyncmldm Android App?

com.wssyncmldm is primarily found in Samsung devices running on Android Operating System. It is, therefore, a system pre-installed application used by the Android OS to periodically check, monitor the system and other apps such as com.Samsung.android.incallui updates in the background.

Wssyncmldm also functions by notifying the user if there are any available system updates for their Samsung devices.

Since the application is designed to run in the background, the phone user is unlikely to meet it in their operations. Besides, the application does not consume data or battery like other applications that need regular checkups.

Com.wssyncmldm is considered a safe system application without any hidden consumption issues.

Of course, we cannot talk about the functions of com.wssyncmldm without you understanding how system updates work. For life to be easier, we all need to accept change and new things that come on our way. This is similar to the world of computers and phones.

After releasing an Android phone, users are tasked to test the device and report their experiences to the developer. The developer then uses the users’ feedback to modify the device system so that it can meet the demands of the majority in the market.

That is how the Android OS has undergone numerous modifications until its latest version Android 11 was released on September 8th, 2020.

When a new version is released, com.wssyncmldm checks all the security patches that take care of some vulnerabilities in the operating system. However, you are advised to check the changelog or release notes before installing a new update on your phone.

Is com.wssyncmldm Safe To Use or Spyware?

Many users confuse this application with spyware or malware such as the OMACP Android app. However, the truth is that com.wssyncmldm is an app kit called Bloatware that runs in the background to keep an eye on the OS status.

This means there is nothing to worry about this wssyncmldm application coming pre-installed on your Samsung device such as the CQATest app.

It is also true that there are some issues associated with com.wssyncmldm in the phone. This has forced many Android users to flock to the internet searching for how to remove the wssyncmldm.

However, according to high-tech experts, you are only recommended to fix the issues without removing the application from the phone since your phone needs it for security.

Why Com.wssyncmldm Has Stopped Working Expectedly?

You might have seen a “com.wssyncmldm has stopped working unexpectedly” pop-up on your screen when using the phone. It could not be a common error associated with the application.

But when it appears, it becomes hard for you to continue using the phone. This is because the message will keep popping up after every 5 minutes interrupting your operations. So, what causes the error?

The com.wssyncmldm has stopped working error is often caused by an app malfunction or cache issue. In most cases, the message will pop up and disappear, making you think that the error is over. But it will appear again and again making you feel disgusted and feel like searching for the application and uninstalling it.

Some people try to restart their phones to see if the notification will not reappear. Yes, this could be a simpler way to deal with the issue, but unfortunately will not solve it permanently. As such, you will be forced to employ other methods as discussed below.

How To Fix com.wssyncmldm App Has Stopped On Android Phone?

As mentioned above, the com.wssyncmldm has stopped error is mostly caused by the app malfunction or cache issues. This means, to fix the error, you need to identify the root cause and deal with it. Therefore, here are a few methods to fix the error or remove the application from your phone:

Clearing the app cache and data is the easiest method to fix errors associated with all applications including google play services keep stopping. To proceed with the process, follow these steps:

If the first process does not solve the issue, freezing the com.wssyncmldm app using the Titanium Backup Software could be the best option. This is because freezing the application will not remove it from the device. Besides, it will not cause other malfunctions with your Samsung account app.

To freeze the application, your phone needs root access to complete the process. If you are not rooted, you can search on how to root your phone first before trying to freeze it. If your phone has root access, follow these steps:

Note: that if you have the Superuser app installed on your Samsung device, you need to grant permission to freeze any app. Simply tap on the Grant option and let the process begin.

ADB is a command-line tool that allows you to communicate with Android devices. You can use the tool to install, uninstall, and debug wssyncmldm application, as well as access its data. You can also run other commands on the device using the Android debug system.

To proceed with the method, you will need a Windows desktop or a laptop, a data cable, and the ADB tool. Once you are ready, follow these steps.

Dealing with the com.wssyncmldm application if it misbehaves on your phone should not be a problem anymore. Given the above methods, you can easily fix the errors associated with the application without worrying about contacting the developers. However, some users still encounter issues even after trying the above methods.

In such cases, you can use other alternatives, including using Samsung Odin to flash the stock firmware. But before using this comprehensive method, ensure you have backed up your Android device. You should also seek professional assistance if you are not sure about what you are doing.