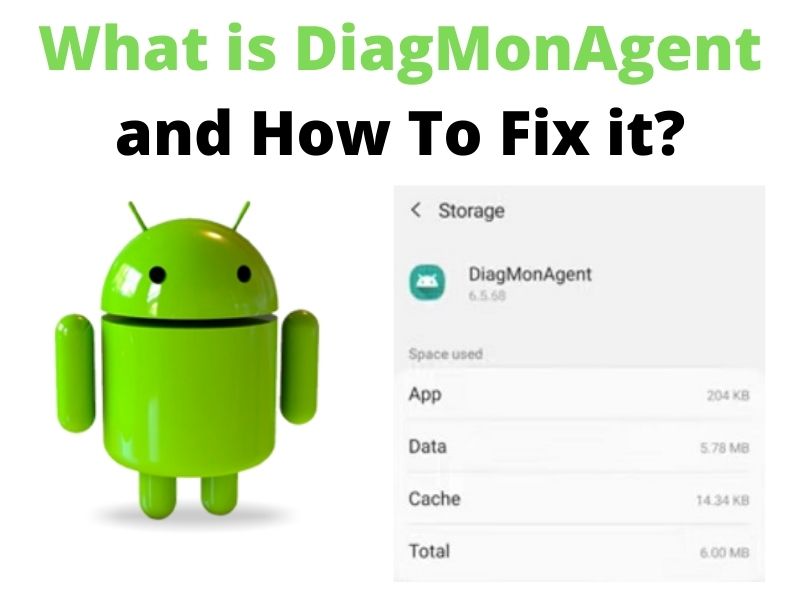 Questions that have been asked severally by Android users include is what is Diagmonagent? Similarly, others have faced many issues when dealing with this feature, especially when the app has stopped on their smartphones.

Imagine when you are performing an important task on your phone or playing your favorite game. Unfortunately, you cannot watch videos or the Android game keeps lagging and what you see next is diagmonagent has stopped. This pop-up can be disgusting, especially for those who have never encountered it before.

Luckily, due to technological advancement in the mobile industry, such issues should no longer be of much concern since they can be solved as fast as they appear. That is why in this article, we try to breakdown down vital issues, including what is a DiagMonAgent and what to do when a com.sec.android.diagmonagent has stopped.

What is DiagMonAgent App On Android?

DiagMonAgent is a short form of Diagnostic Monitor Agent. It is an internal tool or application that analyzes malfunctioning programs in Android devices and sends reports to the developers.

DiagMonAgent application is mostly found in Samsung devices and acts so fast to detect and solve any problem that may affect the phone’s system. In most cases, the DiagMonAgent notification pops up on the screen when the phone is in use. This makes people ask…

Is DiagMonAgent app a virus?

Diagmonagent has stopped message usually pops on the screen when playing a game or watching videos on your phone. It also disappears instantly when you click on any part of the screen, even though it can still be disgusting to users.

While most people ignore the notification as it pops and disappears suddenly when trying to access something on the phone, others still feel irritated and think of it as a virus. However, the truth is DiagMonAgent is not a virus like OMACP.

Com.sec.android.diagmonagent is a built-in application that checks your phone’s functioning and ensures the system runs smoothly. It is, therefore, a useful application hidden inside Samsung devices and its notifications mean it’s functional in monitoring your device.

What is The Function of DiagMonAgent App?

Before looking at why this application is vital in Samsung phones, it should be noted that this monitoring application is mostly pre-installed in Samsung devices and works by sending notifications to the user whenever it detects system malfunction.

Diagmonagent also sends the report to phone developers, who later use the feedback to improve on the new Android phones. Besides, this unseen tool also carries out manual tests on other components such as touch screens, speakers, cameras, and telephones.

Though important, this application also causes some issues on your phone. Therefore, you can check for these issues to understand how DiagMonAgent works:

It Sends A Report Notification Once You Turn on Wi-Fi

If you are using a Samsung phone with Android 5 or above, you will see a notification bar showing “Sending Report” once you turn on the Wi-Fi.

The report is usually requested by the DiagMonAgent Android application but does not show the exact information being sent. However, it is believed that the report is about anything concerning phone programs.

It can be annoying if the notification pops up whenever you turn on Wi-Fi, but it should not be a major issue because it disappears once the report is submitted. However, you may need to take further action if the issue keeps reoccurring.

Why Does Your Phone Keep Saying DiagMonAgent Has Stopped?

The common issue related to the com.sec.android.diagmonagent app is the “diagmonagent has stopped” notification that pops on the screen when performing an important task. The message may appear once and disappear ultimately or it may keep popping until you feel frustrated.

The good news is that Samsung service providers have tried looking at the issues and designed various ways to deal with such notifications. However, if you find it irritating, you can solve the issues using the methods outlined herein.

With this in mind, why is the DiagMonAgent app important on your phone? Here are the major functions of this feature in Samsung devices:

How To Fix The DiagMonAgent Has Stopped Error Message?

As stated earlier, DiagMonAgent is a pre-installed application that comes with the Android phone such as cqatest app and aasaservice. Though on minimal occasions, the user may need to install the monitor by downloading it from the browser. In whichever case, however, dealing with the issues caused by the application can involve complex methods as recommended by the Samsung developers.

Here are the common methods of solving the diagmonagent that has stopped issues:

Force Stop and Clear the App’s Cache and Data

Clearing the Android cache and app data and force stopping it is the easiest method to solve the issues and other problems like com.lge.launcher3. The only drawback is that the method provides minimal possibilities for solving the problem compared to other methods. To perform the method, follow these steps:

If the first method does not work and the application keeps stopping, you may need to factory reset your phone. Factory resetting will delete all the phone’s data, including your downloaded applications. It is therefore recommended to back up your device before performing the procedure.

A device factory reset can be done in two ways, based on the complexity of the problem. These processes are:

Hard resetting your device is among the best method to fix a “diagmonagent has stopped” issue since it deletes all the data and switches your phone back to how you bought it. The process follows these steps:

If the issue is not solved even after resetting your phone, you can try this simple hack to deal with the application by resetting the phone settings. This method resets the settings but does not wipe off the Android’s data.

How To Uninstall Diagmonagent App On Android?

If the above methods do not troubleshoot the issue, uninstalling the DiagMonAgent application could be the only method to solve the problem ultimately. Removing this application can be done in two methods as illustrated below:

Android Debug Bridge (ADB) is a tool that runs commands on Android devices. Using this feature can prove to be tricky if you are not tech-savvy since it requires a computer. To uninstall DiagMonAgent using this method, follow these steps:

This method requires your phone to be rooted with the “Kingoroot” and can be done in the following steps:

Can you now deal with the DiagMonAgent app that keeps stopping on your Samsung device? The article has widely touched on vital points to know about this application. It has also shown various ways to solve the diagmonagent has stopped issue whenever you encounter it. This means that it should no longer be an irritating notification in the future if you follow the recommended steps.

Similar Group How To Topics: