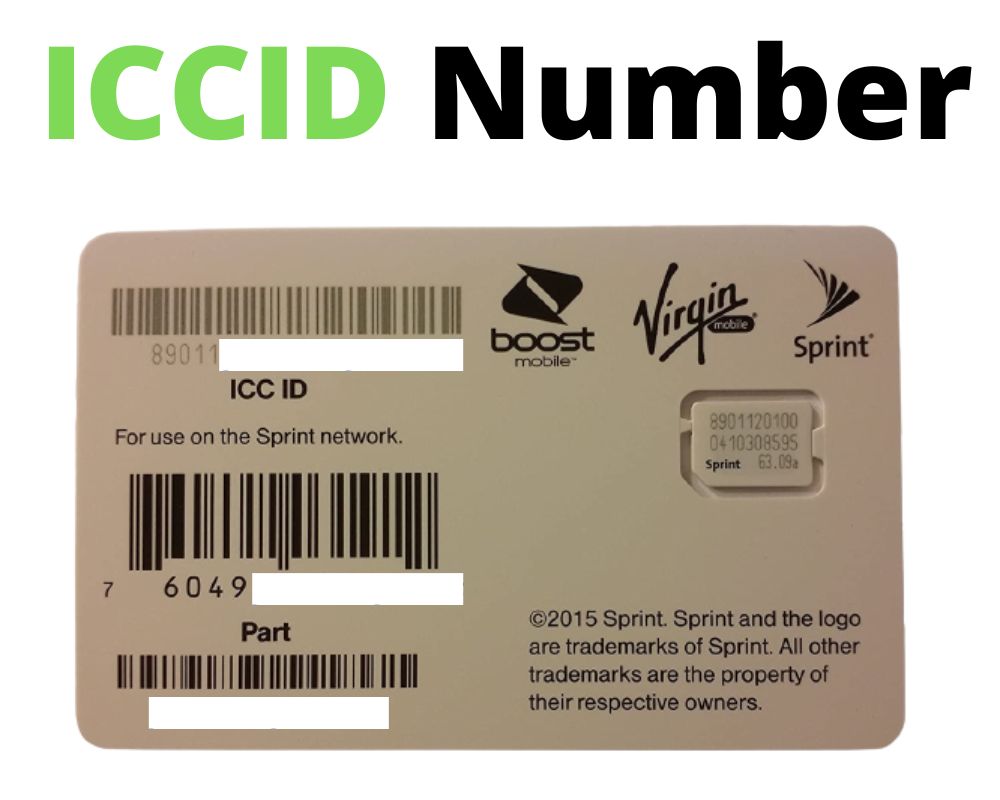 The ICCID number is a code that allows you to uniquely identify your SIM card on a mobile network. But, if you’ve lost your android phone or have had it stolen, then it can be difficult to track down your iPhone or Android phone. That’s where our well-researched article comes in handy!

What Is The ICCID Number On Your Phone?

The ICCID is 19 or 20 numbers that uniquely identify your SIM card. It’s made up of individual parts that identify the card issuer, country of origin, and other details.

Integrated Circuit Card Identifier (ICCID) can be found on the SIM card itself – just look under the phone’s battery.

The number is also printed on the card packaging, and it should be noted in your phone’s documentation.

If you need to find your ICCID number but your SIM card is invalid, you can also dial *#06# on your phone to get the number displayed on the screen.

Why Is ICCID Important?

The ICCID is important because it’s used to identify your specific SIM card and therefore your mobile phone number.

This means that if you lose your iPhone or Android or if it’s stolen, anyone who finds it can’t just use a new SIM card with your phone and start making calls – they need your ICCID first.

If you’re planning on traveling overseas, you’ll need to make sure you have your ICCID handy so that you can activate a local SIM card when you arrive at your destination.

Similarly, if you’re buying a new phone and transferring your old SIM card to it, you’ll need the ICCID to do so.

In short, the ICCID is an important piece of information linked to your SIM card and therefore your mobile phone number. Keep it in a safe place so that you can access it when you need it.

How To Find ICCID Number?

From there, tap “About” and look for “ICCID.”

Should I Give Out My ICCID Number?

You should be mindful of when you should let someone know your ICCID number. Some people argue that it’s a necessary part of owning a cell phone, while others believe that it’s an invasion of privacy.

So, what’s the verdict? The ICCID number is essentially your phone’s serial number. This is an identification number that’s used to identify the SIM card. It’s necessary when you face the SIM card not working and other problems.

On the other hand, giving out your ICCID number also allows people to access personal information about you, such as your contact list and call history.

If your Android or iPhone device is ever lost or stolen, someone with your ICCID number could potentially activate a new SIM card in your phone and use it for their own purposes.

So, should you give out your ICCID number? Ultimately, the decision is up to you. You shouldn’t share things that you’re not comfortable sharing with others.

What Can Someone Do With My ICCID Number?

If someone has your ICCID number, they can potentially exploit it to gain access to your personal information or commit fraud. However, there are ways to protect yourself from this type of attack.

It is important to never give your ICCID number to anyone if you don’t know them. Second, keep your ICCID number safe and secure by storing it in a secure location such as a password-protected file or encrypted database.

If someone has your ICCID number, they can:

If you believe your ICCID number has been stolen, contact the service provider to make sure they monitor your account closely.

How To Find 20 Digit Number If You Don’t Have The SIM Card?

If you need to find your SIM card’s 20-digit number without a SIM card, look in your phone settings. Your SIM card number should be listed under “SIM information” or something similar.

Secondly, you can find the SIM card number from the IMEI number on your device or check the phone box. Also, from your phone, dial *#06#, then press the call button. The IMEI number is a 15 or 16-digit code that uniquely identifies your device.

You may be able to find your SIM card number by checking the “About phone” section. Another way is to contact your service provider. They should be able to give you the number over the phone or through their website.

How To Change The SIM Card ICCID Number?

Is ICCID The Same As SIM Card Number?

Most people don’t know what an ICCID is, let alone that it’s different from a SIM card number. So the first thing you need to know is that each SIM card has a unique ID associated with it called an ICCID.

It’s made up of 19-digit numbers and can usually be found on the back of the card. A SIM card number, on the other hand, is also unique to your card.

But it’s only made up of 14-16 digits. And it’s not necessarily printed on the card (though sometimes it is).

Now that we’ve got that straight, let’s answer the question: are ICCIDs and SIM card numbers the same? The response is no, they’re not the same.

The long answer is straightforward. In some cases, your ICCID may be the same as your SIM card number. But in other cases, it won’t be. It all depends on your carrier settings and what type of SIM card you have.

What Is The Difference Between ICCID And IMSI?

There are a few acronyms important to know when it comes to Android phones. ICCID and IMSI are two of these acronyms, and they both refer to different things.

This means that if you were to switch SIM cards, your device would still have the same ICCID, but it would have a different IMSI. Knowing the difference between ICCID and IMSI can be helpful in a number of situations.

For example, if you’re troubleshooting an issue with your mobile service, your carrier may ask for your ICCID or IMSI in order to help them narrow down the problem.